Trump Hotels Is Getting Massive Twitter Backlash Over Travel Ban

Donald Trump’s executive order had a tremendous and immediate impact on travel into the country for those coming from seven nations, which includes those seeking refuge from the turmoil in Syria. Read more...OlayinkaOyelamiHotels – …Real time availability online traveler-friendly booking
Posted by Olayinka Oyelami at 7:11 AM No comments:

AAA announced Friday that it has added six hotels and one restaurant to its coveted Five Diamond list, a prestigious group that represents just 0.3 percent of the nearly 59,000 AAA Approved and Diamond Rated hotels and restaurants around the globe. Read more...

OlayinkaOyelamiFoundation: TAG Statement for the Record in Opposition to the ...

OlayinkaOyelamiFoundation: TAG Statement for the Record in Opposition to the ...: Treatment Action Group (TAG) releases this statement in strong opposition to the nomination of Representative Tom Price (R-GA) for Secre...
Posted by Olayinka Oyelami at 3:35 AM No comments:

OOCORP AdInsights : No One Knows Your Site Exists: “A man who stops advertising to save money is like a man who stops a clock to save time.” – Henry Ford We’re in a no-joke, take-no-p...
Posted by Olayinka Oyelami at 4:06 AM No comments:

OlayinkaOyelamiPublishing Blog: Born Before Computer (BBC) Virus Afflicting The Au...: In the concluding part of its campaign against what it termed injustice against two major institutions in the country, and institutiona...
Posted by Olayinka Oyelami at 6:09 AM No comments: 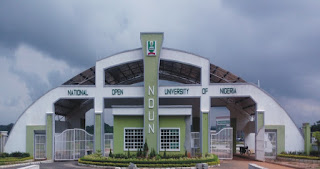 Senate Committee on Tertiary Institutions will hold a public hearing on the National Open University Bill on Monday, January 16.
This information was made known on the social media account of the National Open University (NOUN) on Wednesday.
The bill, sponsored by Barau Jibrin, senator representing Kano North, was originally presented to the Senate in December 2016, and was rejected after passing second reading on grounds of lack of clarity.
In presenting the motion, Jibrin stated that the bill, “An Act to amend the National Open University Act No. 6 1983 was to provide for the inclusion of ICT as another means of providing tuition towards the advancement of learning throughout Nigeria by the National Open University and for other connected purposes 2015.”
The essence of the bill is to legitimise the use of ICT in learning for the recognition of certificates awarded by NOUN.
Jibrin argued that ICT and other technology instruments were already in use for learning at the university and the bill only sought to legitimise its use.
Three sets of NOUN law graduates are currently being denied admission into the Nigerian Law School by the Council for Legal Education on grounds that the NOUN law programme is ‘correspondence or part-time based,’ stating that an acceptable law degree requires a full-time five year duration.
Like other open universities around the world, NOUN offers flexible yet intensive programmes in various disciplines approved by the National Universities Commission among which is the law programme.
In the United Kingdom, the open university is one of the world’s largest universities with a record 1.5 million students having graduated from various courses, and ranks high in surveys of tertiary institutions in the UK.
“As a result of a perspective in the interpretation of the NOUN Act, the Council of Legal Education, CLE, perceives our mode of instruction as correspondence and part-time and therefore excludes our students from participation in the law school programmes,” the vice chancellor had said in an interview in August 2016.
On the advice of the NUC, the NOUN vice chancellor said in August 2016 that the school had stopped the intake of students into the school’s law programme pending the resolution of the issue.
If amended, the school can resume intake of students into its law programmes while graduates will be afforded the opportunity to be enrolled into the Nigerian Law School.
Jibrin, who is also the chairman, Senate Committee on Tertiary Education and TETFund, will host the public hearing while Senate president, Bukola Saraki, will chair the discussions.
Stakeholders have also been advised to send in their memoranda ahead of the public hearing on Monday.

Posted by Olayinka Oyelami at 5:48 AM No comments:

The 2017 U S Presidential Inauguration

When Donald J. Trump and Michael R. Pence are sworn in as President and Vice President of the United States of America at the U.S. Presidential Inauguration on Jan. 20, 2017, it will be a monumental day – not only for the Commander in Chief and his wing man, but for U.S. citizens who have been asked to unite in patriotism.
Diehards making their way to catch the festivities in Washington, DC should note that this isn’t a “business as usual” time in our nation’s capitol. Security will be even tighter and transportation modes will be altered. As a bonus to this epic event, however, will be amped energy in monuments, memorials, museums and other “politics aside” events that will roll out through January.
Here are a few guidelines to keep in mind when visiting Washington, D.C. during this event guaranteed to go down in history. Reand more..Olayinka Oyelami Hotels – …Real time availability online traveler-friendly booking
Posted by Olayinka Oyelami at 4:37 AM No comments: